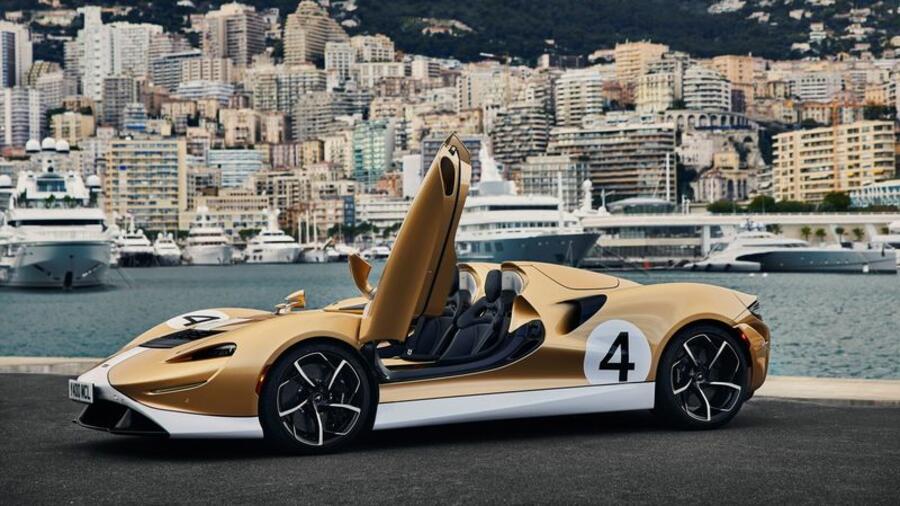 In the supercar world of lithesome lines and exponential leaps in power, the only way for McLaren to elicit a wow is to build a car so completely outside the carbon-fiber box that it could never be confused with anything else in the current McLaren lineup. The Elva—a play on “elle va,” French for “she goes”—is an 804-hp hat tip to McLaren’s open-cockpit racers that dominated the Can-Am series through the 1960s and helped establish the brand as a winner.

Although it reminds us of the past, the Elva is a break from McLaren’s current design language. The carbon-fiber skin stretches like taffy around a modified tub from the Monocell II family, which underpins the Sport Series cars (570S, 600LT, and 620R). In the interest of weight reduction, the material’s thickness measures a mere 0.05 inch at the nose. In fact, the carbon-fiber nose completely lacks panel joints, enfolding the entire front end with a seamless flourish. McLaren claims the minimalist Elva weighs 88 pounds less than the Senna, which itself weighs just a case of beer more than 3000 pounds. 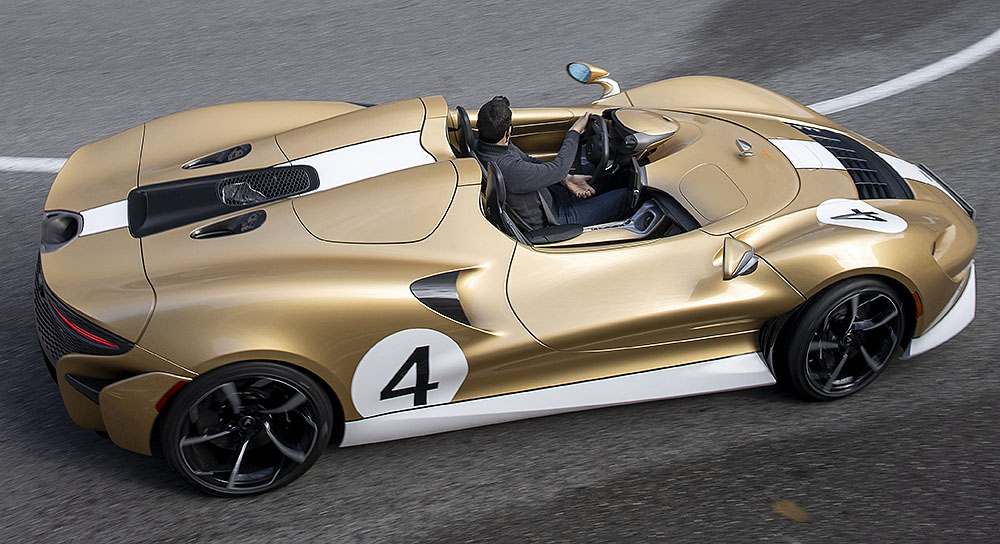 Drop inside, yank the eerily light door down (there’s no glass), and a soft-close function seals the last bit. Adjust the steering-wheel position and the entire gauge binnacle moves with it. The 8.0-inch screen cluster is accented with brushed aluminum joints and flanked by dials for suspension settings on the left and powertrain modes on the right.

Judged by the clear feedback through the steering, the lively throttle response, and the hard pedal and grab of the brakes, the Elva experience is like that of any modern McLaren, but the familiarity ends there. The cabin unfolds into the exterior, the curved door panel flooding color into the otherwise unadorned cockpit. The effect makes the whole experience feel like you’ve been transported into a swoopy Pininfarina concept car from the 1969 Turin Motor Show. 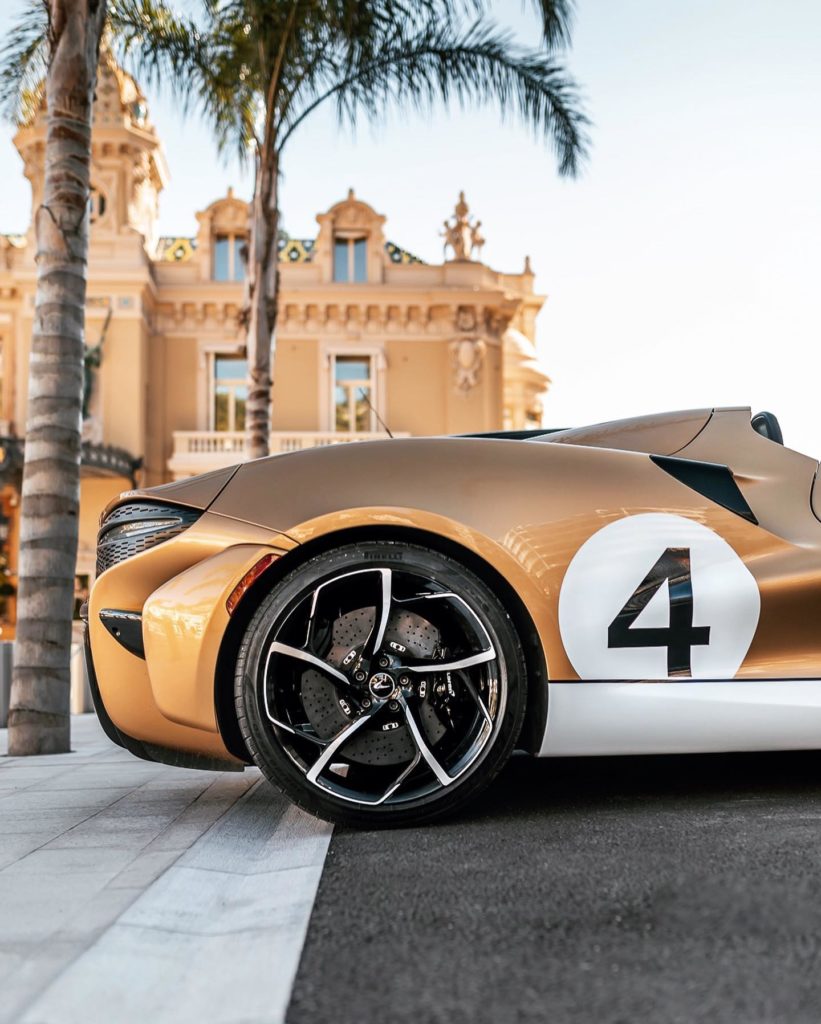 The view ahead and around is completely uninterrupted by anything whatsoever—no wiper streaks, no bug-smudged glass, no A-pillars blocking the sightlines. Every crack and bump of pavement in clear sight. It’s a revelation, this freedom of vision. Inches behind the front seats is the Senna-derived twin-turbo 4.0-liter V-8 that shoots expletives through an Inconel and titanium exhaust. Without a top between you and the 804-hp V-8 behind your head you get a lot of lovely sounds, but the lack of a windshield means you hear the whine from the electro-hydraulic power-steering pump mounted up front.

A stream of tears and snot proves that wearing an open-face helmet and aviators is apparently not enough protection, even at 35 mph. Press a small dashboard button and McLaren’s Active Airflow Management System (AAMS) deploys a 5.9-inch-high rectangular windblock at the nose above 40 mph. McLaren calls the resulting wind reduction a “relative ‘bubble’ of calm,” but “relative” is apparently relative. It does work, as it keeps the driver’s head from buffeting against the seatback at speed. In the Elva, speed isn’t just a metric recorded on a speedometer. Speed is the whirring and whooshing passing through you as you dare to keep the right pedal buried. It’s the tightening chin strap as the air pressure fights to pull your helmet off your head. 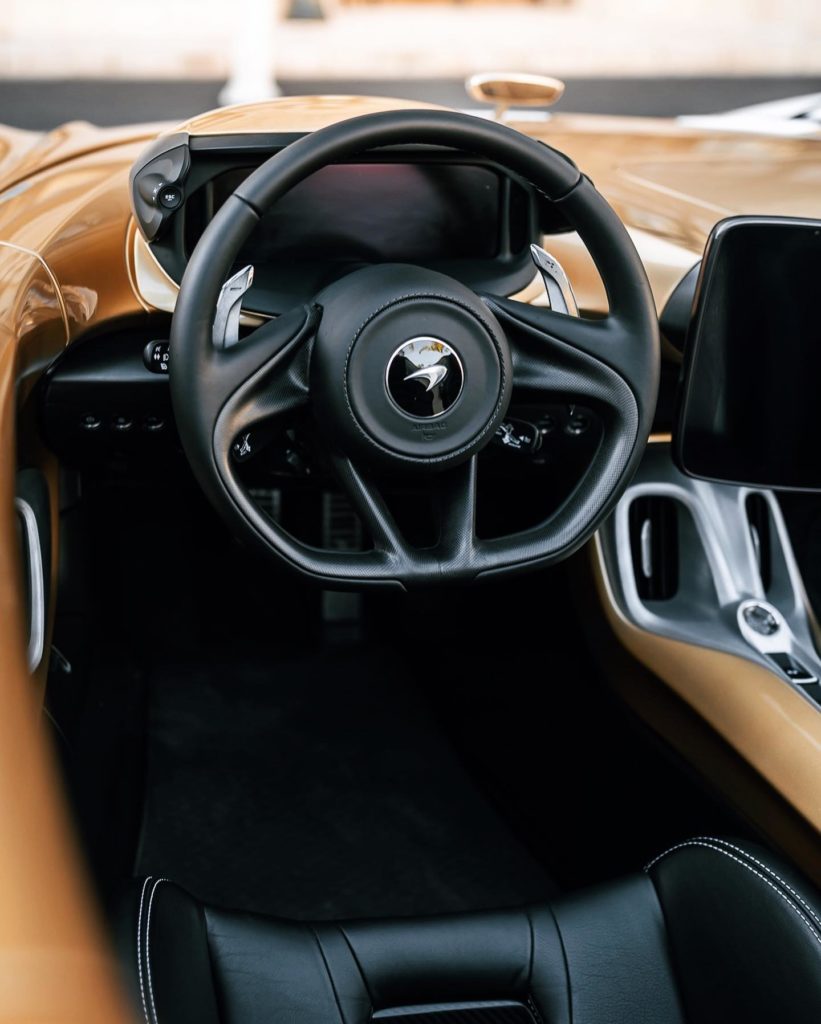 When cornering, the car feels agile and light yet stable. The driver can select how much wheelslip and yaw to allow via McLaren’s Variable Drift Control settings. The 305-section-width Pirelli P Zero Corsa rear tires do a decent job of hooking up, but the Elva’s traction control will quash tire-smoking torque, making it possible to floor the accelerator out of corners without upsetting the tail. Switch the handling to its most aggressive Track setting (which requires the windblocker to stay tucked away) and the suspension solidifies considerably, lending an even stronger bond to the tarmac below.

McLaren says Elva will hit 60 mph in under 3.0 seconds and can beat the Senna to 124 mph, achieving the speed in a mere 6.8 clicks before topping out at what must be an absolutely brutal 203 mph. A 911 Turbo S cabriolet will post similar numbers without bugs in the teeth for about an eighth of the cost—not that 149 Elva buyers are cross-shopping six-figure Porsches.

Ostensibly, this roadster is less a car than it is mobile artwork. The Elva faces McLaren’s uncertain future with abandon. It is brave, involving, unusual, deceptively simple, and a breath of fresh air.